What is it?
Amber is fossilized tree resin (not sap) and technically not a gemstone but referred to as such (1)  Amber was first used as an ingredient in perfumes, then as a healing agent in folk medicine, and finally in jewelry. Originating as a soft and sticky resin, it can sometimes contain animal and plant material as inclusions. Amber occurring in coal seams is called resinite, and the term ambrite is applied to that found specifically within coal seams.(2)

The English word amber derives from the Arabic anbar,  meaning “perfume.”  Amber from the Baltic Sea has been extensively traded since antiquity, and in the mainland, the natives called it glaes (referring to its see-through quality similar to glass.)(3)

Amber colors not only include the usual yellow-orange-brown that is associated with the color "amber", but can range from a whitish color through a pale lemon yellow, to brown and almost black. Other more uncommon colors include red amber (known as "cherry amber"), green amber, and blue amber, which is rare.  Much of the most highly-prized amber is transparent, in contrast to the very common cloudy or opaque amber. Opaque amber contains numerous minute bubbles. This kind of amber is known as "bony amber."

Formation
“Molecular polymerization” (molecule is the smallest particle of a pure chemical substance retaining it chemical composition and properties while a  polymer is a long, repeating chain of atoms) resulting from high pressures and temperatures produced by overlying sediment, transforms the resin first into copal. (Copal is a name given to tree resin that is particularly identified with the aromatic resins.)  Sustained heat and pressure drives off terpenes (Terpenes are a large and diverse class of organic compounds, produced by a variety of plants, particularly conifers) and results in the
formation of amber.(4)

If one wants to find out if their amber is natural or man made, the flotation test is recommended. Make a saturated solution of regular table salt and water and place the piece of amber in this mixture. If it floats, it is amber. If it sinks it is man made (some natural copals will also sink and you would need to make more scientific tests to make a determination).

Historically, the coast around Königsberg in Prussia was the world's leading source of amber.  About 90% of the world's extractable amber is still located in the Kaliningrad Oblast of on the Baltic Sea (which was previously Königsberg in , before World War II.)(7)

Pieces of amber torn from the seafloor are cast up by the waves, and collected by hand, dredging, or diving. Elsewhere, amber is mined, both in open works and underground galleries.  Dominican amber, especially Dominican blue amber, is mined through bell-pitting (a primitive method of mining coal), which is dangerous due to the risk of tunnel collapse.(8)

Notable occurrences beyond all Baltic countries include Venezuela; Russia; Romania; Burma; in coal seams in Wyoming, USA, and the Dominican Republic.

Amber ornaments have been found in Mycenaean tombs (dating 13,000 years ago) and elsewhere across Europe.(9) Baltic amber also in cupola tombs of Mycenaean culture built on Crete Island were found during 1600-800 BC.(10)

Mystical Meaning & Healing Properties
Beginning during the Stone Age and continuing throughout history, many cultures attributed special meanings and mystical properties to amber. Greek and Roman poets described amber as sun-dried tears or drops of the sun that spill into the ocean, and they are washed onto the beach. Beyond their poetic descriptions of its beauty, the Greeks wrote of amber's electrical characteristic. When rubbed with cloth, amber becomes electrically charged and attracts particulates.

Other uses include amber teething rings for babies because the stone is said to be a natural pain reliever. Said to absorb any negative energies, it is credited with restoring positive balance. Since amber is believed by some to carry the force of life, people who feel lethargic can wear it to restore their energy. If you're suffering anxiety or depression, amber is attributed to comforting people, and if you feel a little like the stiff tin man in the Wizard of Oz, problems like arthritis in the hand are relieved by wearing amber bracelets.(11)


http://www.cliptomania.com/ has an eighteen different styles of amber non-pierced earrings which can be found by clicking this link Gemstones& Pearls - Amber Clip On Earrings. You can also do an Advanced Search and type in the word "amber." 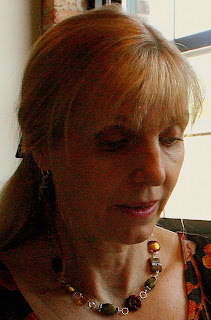 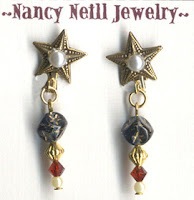 After being inspired by her mother’s jewelry designs, Nancy Neill left her job and took up full-time jewelry making. Now, over twenty-five years later, she continues to create original pieces that flourish at boutiques & museums across the nation.

Nancy spent her early life in New England, where participation in all things creative and her respect for history began. In her teen years, the family moved to Athens, Greece and began an adventure that would influence her for a lifetime. Extensive travel throughout the Mediterranean and European countries, visiting historical sites and art museums left a permanent impression.

Her college years were spent in the Midwest, where she studied art history to learn more about all the art she had experienced. Studies also included art education for elementary students. Later courses in interior design complete her educational background to date.

Career experiences include advertising agency work, owning retail home furnishing stores, and apparel store management which finally landed her in the San Francisco Bay Area as advertising and special events coordinator for a luxury Italian handbag manufacturer. This exposure to the world of fashion accessories in the naturally beautiful and creatively stimulating Bay Area began Nancy’s adventures in jewelry design.

It started as a hobby, when her co-workers kept literally buying the jewelry off her neck. And so it began… when her mother said: "If I were you, I would quit my job and start making jewelry full-time!" Nancy says, "Always listen to your mother!"

After heeding this sage advice, Nancy collected found objects, beads, buttons, charms and other findings to create unique one-of-a-kind pieces. Soon, her work was in many boutiques throughout the San Francisco area and grew to be a nationally represented collection.

She has since relocated to beautiful Fox Valley in Northern Illinois, where each piece of jewelry is individually crafted by Nancy and her jewelry artisans. Inspired by nature and the world around us, each item is carefully designed to celebrate nature, to commemorate events or remember visits to special places, or simply to express the individuality of the woman who wears it.

By using pewter and brass charms, semi-precious stones, Swarovski crystals, unique glass beads, and metal jewelry components, Nancy is able to create matchless pieces of art that capture the essence of what is life.

Cliptomania.com carries many gemstone non-pierced earrings. From Agate to Zircon, many of our designer's earrings include various gemstones from around the world.  Amid the beauty I wondered about some gem specifics. Questions like....Where did it come from? What gives its distinctive color?  Is it common or rare?  ..and many others.  Of course the internet is full of "sources" for anyone to draw information; however, I have decided to glean the technical information from a handful of "trustworthy" sites, and also cite from a fun site with a  mystic point-of-view giving origins, meanings and healing properties that some people believe the gems possess
.


Because turquoise is one of my personal favs, I'm going to start with it.


Prized for many years, this beautiful stone was used by the ancient Egyptians in jewelry and worn by pharaohs and kings and is probably one of the oldest known gemstones. King Tut's solid gold mask (below right) has inlayed turquoise, lapis, carnelian and onyx. The name turquoise may have come from the word Turquie, French for Turkey, because of the early belief that the mineral came from that country (the turquoise most likely came from Alimersai Mountain in Persia (now Iran) or the Sinai Peninsula in Egypt, two of the world's oldest known turquoise mining areas.)  Another possibility could be the name came from the French description of the gemstone, "pierre turquin" meaning dark blue stone.

Chemically, a hydrated phosphate of copper and aluminum, turquoise is formed by the percolation of meteoric or groundwater through aluminous rock in the presence of copper. For this reason, it is often associated with copper deposits as a secondary mineral, most often in copper deposits in arid, semiarid, or desert environments.  Even the finest of turquoise is fracturable, reaching a maximum hardness of just slightly more than window glass. The lustre of turquoise is typically waxy to subvitreous and its transparancy is usally opaque. Color is variable ranging from white to a powder blue to a sky blue, to a green-blue to a yellow-green.  The color depends on the minerals found in the area where it grew. The more copper in the mix produces a bluer stone. The more iron in the mix produces a greener stone.

In the ancient Persian Empire, the sky-blue gemstones were earlier worn around the neck or wrist as protection against unnatural death. If they changed color, the wearer was thought to have reason to fear the approach of doom. Meanwhile, it has been discovered that the turquoise certainly can change color, but that this is not necessarily a sign of impending danger. The change can be caused by the light, or by a chemical reaction brought about by cosmetics, dust or the acidity of the skin.
I found the general guidelines for caring for turquoise quite interesting. Prolonged exposure to the sun may discolor the gem. Being a phosphate mineral, it is also fragile and sensitive to solvents. Some perfumes and other cosmetics will attack the finish and may alter the color, as will most commercial jewelry cleaning solutions. Therefore, care should be taken when wearing turquoise and the use of sunscreen, lotion, or hair spray, which if used, should be applied before putting on turquiose jewelry, and then gently cleaning the jewelry with a soft cloth to avoid any residue build up.  It should also be kept in its own container to avoid scratching by harder gems, but the container should not be airtight.
Turquoise is one of the official birthstones for the month of December as adopted by the American National Association of Jewelers in 1912. It is the planetary stone for Aquarius, Taurus and Sagittarius. It is sacred to many Native American's and was carved in the shape of animals and birds. These carvings were placed in tombs to attract beneficial spirits and guard the dead. Turquoise was also used by medicine men for healing and by warriors who fixed it to the end of their bows to insure accurate shots.

Turquoise is considered one of the oldest protection amulets, and was also known as a symbol of wealth in many cultures. Other meanings associated with turquoise include: protection from negative energy, ability to bring good fortune, aid in promoting serenity and meditation as well as providing energy, wisdom, balance, honesty, communication, strength, friendship and love.

www.cliptomania.com offer's many non-pierced gemstone earrings including those with turquoise. To see them, visit the gemstone page of our website or do an Advanced Search, the elongated box under the website name to find a particular gemstone.