Posted by Cliptomania.com at 1:21 PM


A taste of our wide selection of gemstone non-pierced earrings with either sterling silver or 14K gold.

Posted by Cliptomania.com at 12:50 PM

Posted by Cliptomania.com at 2:31 PM

Since David Howell, founder of the New York company which bears his name, was a boy he had a great desire to make things.  He would take apart various household items, alarm clocks, toys, and even a car to understand how all of them were made and how the parts worked individually and together.  David would then put these items back together as if he had never touched them in the first place.  This taught him that he couldn’t make everything himself.  Ultimately David learned it takes collaboration and other creative voices to design and produce great items, something he believes in to this day.

David’s initial inspiration most often comes from a place he or someone he knows has visited.  If the latter, and permission is needed, like he received for the CMA Music Festival in 2013, he will acquire it then take a camera and start exploring, snapping pictures, asking questions and making drawings.

His design influences not only come from places, but also history. David has created book marks of past presidents like Eisenhower and other historical figures like Ben Franklin.  He has made earrings influenced by architects like Frank Lloyd Wright and sculptures like the Thinker by Rodin.  Other influences include nature, faith, ancient cultures, literature and more. His designs are put on bookmarks, pendants, business card cases, letter openers, pins, earrings and more.  Worth noting also is that everything his company makes is made in the United States under environmentally friendly standards; an issue that is playing a major role in changing many business practices worldwide.

Cliptomania.com began purchasing from David Howell and Company early in 2007.  We used pre-made clip tops, ordered from another vendor, to turn his pierced earrings into clip-on earrings.  Three years later, thanks to the buyer from the Carnegie Museum of Art telling David that many of his designs were well suited for clip tops, he agreed. Cliptomania no longer had to discard the pierced tops.  Co-owner of Cliptomania, Candy Santo, is grateful for the change as she has said, “It wounded my Scottish soul to waste perfectly good fishhooks.”  Since then a majority of David’s earrings on the open market can be purchased as pierced or clip. His clip tops are simple clips that are round and flat faced and allow the design to hang below.

Posted by Cliptomania.com at 11:05 AM

May’s flowers are out in force! I have seen phlox, dogwoods, roses, azaleas, clematis, anemone, and more in bloom.  It only seems appropriate for cliptomania.com to get into the spirit of Spring Flowers!  There is no reason to just put flowers in a vase when you can also adorn your ears with flowers too! So why not stop by the #1 site for clip on earrings and get a pair of more of flower clip on earrings to show express your appreciation or love of flowers!
Posted by Cliptomania.com at 8:54 AM

The Outdoors is Alive Again

Daffodils are in bloom and the trees and bushes are budding. Most lawns have been cut already and temperatures are holding in the fifties and sixties during the day.


Cliptomania.com has three sections to meet your spring clip earrings need! We have a Something Special section with Animals where you can view La Contessa’s Primavera Bunny Clip on Drop Earrings and other cute creatures. Then there is our Flower section for those customers who love flower’s beauty and lastly we have a Holiday section which is specific to either a season or holiday. Visit cliptomania.com today!
Posted by Cliptomania.com at 9:26 AM

the "Eye of the Needle" 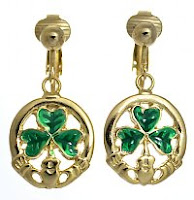 Or are you more subtle in your expression of St. Patrick's day like with these Irish Marble Beads Clip on Drop Earrings.

Which one are you on St. Patrick's Day someone who wears a symbol of the day or are you more subtle?

Posted by Cliptomania.com at 11:20 AM