﻿
Cliptomania.com has some wonderful non-pierced earrings that fall into all these colors. Check out our Rainbow section to see a vast array of clip on earrings. You can also use the Advanced Search feature to look for a specific color, style, designer, and more!

﻿
Looking for reds in all the right places! 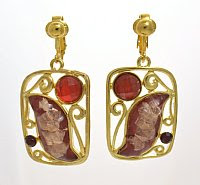 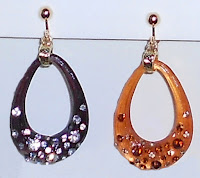 What is it?
Translated "green gemstone" it orginates from the Greek "smaragdo" via Old French "esmeralde." Emeralds are beryllium-aluminium-silicates with traces of chromium and vanadium which give it the green color. Flaws (or in the case of the emerald and similar to the gemstone amber) are actually inclusions that make the gemstone more valuable. Emeralds with inclusions verify authenticity, and account for the desired darker green color. Some specialists call the inclusions, cracks and fissures "jardin" as they resemble the tiny green plants in an emerald garden which allude to its all-natural origin.

Where is it found?
It is speculated that the best emeralds are mined in South America, particularly, Colombia.  Other notable mines are located in Brazil, Zimbabwe, Zambia, Madagascar, India, Afghanistan, Pakistan and Russia.

In South America, emeralds were found by the Incas and Aztecs who regarded them as holy. Their beliefs, according the Vedas (holy scriptures) say emeralds hold healing properties and promise good luck.

In ancient Rome, the color of Venus - goddess of beauty, love, sex & fertility -  was green. The emerald's green color was said to be the color of life and springtime, as well as the color of beauty and of love. Emeralds were also used in wedding rings denoting faithfulness.

The Egyptians, who believed in the emerald's metaphysical and magical powers, exhausted the finds near the Red Sea between 3000 and 1500 B.C.  These mines were later referred to as "Cleopatra's Mines" as she wore many pieces of jewelry containing this magnificent gem.
﻿

﻿
﻿The Emerald Buddha is a statue that surfaced in northern Thailand in the Lannathai kingdom in 1434. One account of its discovery tells that lightning struck a pagoda in a temple in Chiang Rai, after which, something became visible beneath the stucco. The Buddha was dug out, and the people believed the figurine to be made of emerald, hence its name. 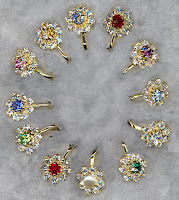 Research shows that emeralds have been mined and sought after for well over 4,000 years by many civilizations, and continue to be one of four highly valued gemstones - the others being: diamond, ruby and sapphire.


Care of Emerald Jewelry:
Although the emerald has a Mohs Scale hardness of 7.5 to 8, the inclusions, cracks and fissures within the stone increase the possibility of fractures and damage. Therefore, to protect your jewelry, certain care instructions should be noted.

One suggestion I read encouraged one to purchase emeralds that have been bezel set, thus protecting the stone from accidental bumps, as well as emeralds surrounded by other stones offer increased protection.

Ask the jeweler if the emerald has been "oiled" to minimize the appearance of internal fractures that could lead to breaks in the stone.

Cleaning is basic. Put warm water in a basin. If the water is too warm for your hand, it's too warm for your emerald. Add a mild dishwashing soap to the water. Place jewelry in the water to soak for no longer than ten minutes. Remove and clean with a toothbrush, rinse and pat dry.  Emeralds should not need cleaning more than a couple times a year.  If the stone has been oiled, after several years of wear, it may need to be re-oiled.  Check with your jeweler. Never clean your emeralds with ultrasonics, steam or petroleum distillates (in many jewelry cleaning solutions) as these remove the oil from the gemstone.


Store your emerald jewelry separately to avoid scratching.  Put emerald jewelry on last and take it off first so that chemicals in cosmetic and hair products do not damage or dull the stone.

Folklore and the Mystic:

The traditional birthstone for the month of May and a traditional gift for the 35th Anniversary
, emeralds are believed to have many positive properties for body and mind.  Known as a "tonic" for the body, it is said emeralds aid in alignment, and in strengthening the eyes, heart, immune and other systems, including balancing the wearer who seeks truth. Said to ward off negativity and strengthen spiritual perception, it has been used as a scrying stone to foretell the future.

As the sacred stone for love and romance, it is said to enhance joy, memory, harmony and bring a lover closer.  For some, the emerald has been considered a stone of prophecy bringing the wearer wisdom and insight.

Christians view the emerald as a symbol of faith and hope.  Biblical narrative depicts a rainbow around God's throne shining like an emerald.


Cliptomania.com offers emerald colored crystals and glass clip on earrings in a variety of styles and sizes. Also visit our Gemstone pages.  In business since 1999, let Cliptomania be your first source for beautiful non-pierced earrings including gold, silver, pearls, gemstones, sea glass, designer earrings and more!