The cost of precious metals, like gold and silver, used by jewelry artisans can be quite expensive, and subsequently that cost is passed on to the consumer.  In this era of rising metal costs, jeweler's have begun to seek alternatives, and one such alternative to sterling silver, is "silver-filled" - or as we call it, "new silver."

Much like the gold-filled we purchase when solid gold seems too expensive, silver-filled is a cost effective alternative as well.

View the difference with the following  picture from the Fire Mountain Gem's website. The wire on the left is silver-filled while the wire on the right is silver-plated.  Notice that the silver-filled wire has a thicker layer of silver. Either a 5% or 10% layer of sterling silver is bonded to (filled with) a copper or brass alloy. It is not the same as silver-plated in which a very thin layer is laid on top of a copper or brass core.

Silver-plated metals are not as durable and in time, will wear off and expose the underlying metal. With silver-filled, the layer is sufficient enough to handle small damage without exposing the alloy, and will not wear off.

Due to the rising cost of sterling silver, Cliptomania's jewelry manufacturers have made this  'New Silver' a viable economic alternative to help us offer fine silver jewelry at a fraction of the cost. We've taken advantage of these opportunities to bring this saving to our customers. If you are a frequent sterling silver shopper on our website, you may have noticed that some earrings have been restocked these past months but in the new silver with a subsequent price decrease. We are happy to pass this savings on to you.


Cliptomania remains committed to bringing you fine non-pierced earrings that are not only beautiful, but affordable. With over 500+ clip on earrings in a variety of styles, colors and metals, we are confident you will find what you are looking for.


We look forward to your shopping with us!
www.cliptomania.com

Posted by Cliptomania.com at 1:01 PM

What is it?
Alexandrite is a main variety of Chrysoberyl, and very scarce due to its chemical composition.  Known for its ability to change color, called the alexandrite effect, the phenomenon occurs with a change in the source of illumination. The stone exhibits green or bluish-green in daylight, yet will turn a soft shade of red, purplish-red or raspberry in incandescent light. Chromium, as the major impurity, with iron and titanium are the elements that facilitate the change.

Discovered by a Finnish mineralogist, Nils Gustaf Nordenskiold (1792-1866), it was named "Alexandrite" in honor of the future Tsar of Russia, Alexander II.


Ancient Usages.
Found in the Ural Mountains of Russia in 1830, the old Russian Imperial colors were green and red, so Alexandrite was initially only mined for royalty. It wasn't until other deposits were found in various locations that the gemstone gained worldwide recognition. 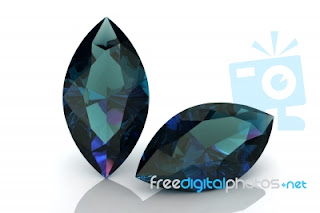 Where is it found?
Russia was named the prime source for these gemstones, yet in the 1990's other deposits were located in India, Madagascar Ceylon, Brazil, Burma, Zimbabwe, Tanzania and Sri Lanka, but said not to hold the color changing qualities of those found in the Ural Mountains.

Some gemstones are lab-grown (synthetic) and are not actually chrysoberyl, but corundum laced with trace elements or color-change spinel. These are referred to as 'simulated alexandrite' or 'Czochralski alexandrite' after the process that grows the crystals.

Cleaning & Care.
On the Moh's Scale, alexandrite is a solid 8.5 and is noted for being tough, hard and durable. A simple cleaning includes warm water with a few drops of dish detergent, rinse and polish with soft cloth. Alexandrite jewelry  can be cleaned in an ultrosonic bath or steamed cleaned without problems.

Alexandrite jewelry should be stored separately because of it's capacity to damage and scratch other jewelry and stones, as well as be scratched itself. 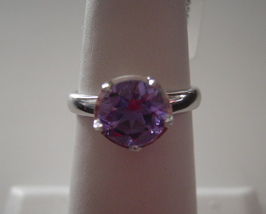 The Mystic & Folklore
Alexandrite is the birthstone for the month of June and the 55th year marriage anniversary stone. It is also known as the stone of Friday, or the stone of "Friday's Child."

Because it's relatively a 'young' gemstone, there is not much information for this category. However, since it's discovery, the gemstone has been attributed to luck, good fortune and love, and in Russia, good omens. It is also said to increase creativity, imagination and intuition.

Cliptomania has been in business for over 15 years, and offers over 500 non-pierced earrings in a wide range of styles, colors and sizes.  Including designer, gemstone, gold, sterling silver, big & bold, specials, glitter...and more! On a daily basis, over half our customers are first time shoppers! Find clip on earrings you love by browsing the website.